With the Women’s Euros kicking off this summer we wanted to shine a light on some of the amazing female athletes here at Soccer Assist.

These Soccer Assist athletes are taking the unconventional route to the top by leaving their friends and families and crossing the ocean to play at college in America.

The UEFA Women’s EURO 2022 competition kicks off today and many of the current Lionesses squad played and studied in the US. Three members of the squad played for The University of North Carolina (aka Tar Heels) including, Lucy Bronze, Lotte Wubben-Moy and Alessia Russo. Defender Rachel Daly played for St Johns University, after university Daly continued to play professional football in America being the sixth overall pick of the 2016 NWSL College Draft. The final player is Demi Stokes. Stokes signed a 4 year scholarship to the University of South Florida, since returning to the UK in 2015 Stokes has singed for WSL side Manchester City and has been a regular in their first team squad.

In our summer series we look at five Soccer Assist athletes who have been to or are going to America to study and play football full time.

Up first is 19 year old Jasmin from Broadstairs Kent. Jasmin is heading to Texas this summer to play for the Blinn College College Buccaneers.

Currently playing for Herne Bay women, Jasmin has just finished her exams while working part-time. She will be flying out to the States this July and she couldn’t be more excited. 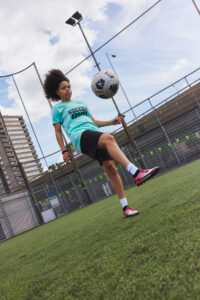 Tell us about a time you faced an obstacle or challenge playing football as a female?

When I was younger, finding opportunities to play with other girls was hard. Thankfully nowadays it’s more popular, but when I started out there was nowhere for me to really find any other girls that wanted to play football.

So I played with boys and it was disheartening at times when hearing comments like girls shouldn’t play football or girls can’t play football. But as you get older that kind of thing makes you stronger. I feel like I have come out on top too, as the older I have got, the less I listened to them and the more I have shown people how good I am.

How do you manage your time between school and football?

In all honesty I find it tough, but I do know that it’s important to establish times to do certain things. I create a timetable so that I know I have let’s say 3 hours to study these things, then I will have breaks in between.

I think it’s important to prioritize studying too. As when you are training that means you can focus solely on training as well as just enjoying it more, rather than worrying about having to do something after.

I train on Monday and Thursday evenings and I also do some workouts at home, some simple body weight training, boxing cardio, skipping… All stuff that is easy to do at home rather than traveling to the gym or going somewhere far.

How do you manage your physical workload in training and matches when you are menstruating?

It’s a tough time in many ways – one thing is that it can make me more emotional so I have to learn to be less tough on myself. For example, I’ll try not to dwell too much about a missed pass or shot.

Physically I will also try to prepare my body a bit better. There is science behind women’s joints being a bit more tender so I will do a longer warm up that focuses on my joints and I will wrap up my ankles to try and avoid injuries.

How do you manage your nutrition, do you take particular care in what you eat?

I don’t do anything special here. I am looking forward to learning more about this when I am at College in America.

The only things I consciously do is time my meals, so that I’m not too full or heavy when I go to training. I guess subconsciously I do think about carbs and protein and avoiding fat or greasy foods. I do enjoy my carbs. I eat a lot of potatoes, pasta and rice, but I balance it out with a lot of vegetables too. 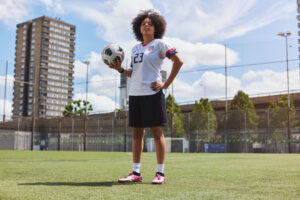 What sacrifices have you made to get to where you are today?

It was quite hard at times as I reached that stage in my life where people started to go out partying, drinking and going out in the evenings. So I did have to create a discipline in myself to be able to say no I can’t come or I can’t do that because I have training. 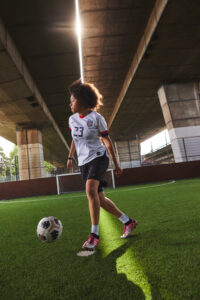 ant it is to me. So they would often plan stuff around that. But yeah, you do get FOMO! Looking back at it I don’t regret these decisions though.

What is your ultimate goal in football?

In football, I want to see how far I can make it in my sporting career. The big dream is to play for England, so I will work my way up over the coming years and push myself to get there. I know there will be many steps and hurdles up until that point but I aim to reach that goal some day.

What advice would you give to a female who may be a bit nervous about going to College in America?

It’s normal to be nervous, especially when taking a huge step outside of your comfort zone like this. Remember: you will get as much out of this experience as you put into it so don’t be afraid to push the boundaries of what you’re capable of – you’ve made it this far. This is an opportunity for you to express yourself, so make new friends, play your football and enjoy as much of it as you can. It’ll be scary but it’ll be worth it.

Stay tuned for the next instalment of our Summer series, with University of Mobile (Alabama) soccer scholar Leia Carter.

Find out more about our women’s football trials taking place at Stowe School this July.