By Soccer Assist18th June 2018No Comments

Soccer Assist athlete Simon Van Rheeden has officially committed and transferred to Mid-American Christian University on a 90% soccer scholarship. The Oud-Beijerland born 21-year-old is a real clinical striker. At the age of 19, Simon committed to join the men’s soccer team of Auburn University at Montgomery Alabama for the 2016 season. However, Van Rheeden came to Soccer Assist agency in his Sophomore year in 2017 looking for for a new college challenge. Simon has confessed that he loves Oklahoma therefore when the offer came in to transfer to  Mid-America Christian University to play in the National Association of Intercollegiate Athletics (NAIA) he was very keen to accept.

During his time at Auburn University at Montgomery Van Rheeden appeared in all 19 matches with 12 starts. He is one of three Warhawks who saw the pitch in every contest and finished tied for the team lead in goals with six and second in points with 14. The striker took 25 shots with 17 on target, whilst scoring a career-high three goals at Mississippi College. He finished the season on a four-match point streak, logging assists at Union and Christian Brothers with goals at Emmanuel and versus Spring Hill College. Simon is an impactful striker with a great vision of the game and a clear talent for getting the ball in the back of the net, whether that by an assist or scoring the goals himself.

Soccer Assist director Junior states, ‘Simon came to us during his Sophomore year as he was looking for a fresh challenge at a new university. From the moment we saw his highlight tape it was evident Simon could become a key player in most programs, and we were not wrong! Many universities enquired and put in offers but we felt Coach Bice will get the most out of the Forward. Simon has been a pleasure to work with and is a player we are keen to see develop!’

Mid-America Christian University assistant men’s soccer Coach Adam Kay said ‘From the videos online Simon certainly looks like a solid player, and also know you guys send over quality so I think he would be a good fit for us.’ Kay also highlighted Van Rheeden’s strongest quality stating ‘He loves putting the ball in the back of the net too!’ Which is exactly why the Netherlands born striker received a 90% scholarship offer.

With his experience playing in the Netherlands and NAIA, Soccer Assist knows that Simon Van Rheeden will continue to be a massively impactful player at Mid-America Christian University. 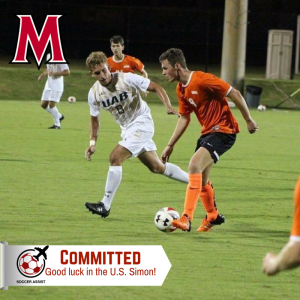 If you would like to follow in the footsteps of Soccer Assist client Simon Van Rheeden and attain a soccer scholarship to the U.S. apply today here.