By Soccer Assist14th June 2018No Comments

We are excited to announce that Soccer Assist client Joshua Bonaiti has secured his place and committed to the Heartland Community College on a 100% tuition scholarship. Hailing from Milton Keynes the former Semi-professional goalkeeper will be joining Heartland Hawks Men’s soccer roster this fall.

Joshua tells us that he has been playing soccer from a young age, he had many successful years of youth football, having been involved numerous in an elite sets up for semi-professional clubs. Josh has an impressive football resume with multiple semi-professional teams listed such as goalkeeper for Kettering Town FC, Brackley Town FC and Bedford Town FC.

The 19-year-old goalkeeper describes his playing style as ‘a confident goalkeeper who is coming up through the semi-professional leagues of English football. I have been playing men’s football for 4 years, from the age of 16 years old. My best attribute is shot stopping and communication. I strongly focus on the mental & psychological aspects of my game such as my preparation and mindset.’ Josh attended Soccer Assist’s Milton Keynes assessment day in early 2017, since then he has been a key player in the Soccer Assist showcase matches. Josh has been involved in memorable showcase fixtures against Youtube super team Rebel FC and SA Hackney Marshes tournament against Adidas Glitch team and Leyton Orient FC.

During the recruitment process Joshua received many offers from colleges across the U.S., however, Joshua committed to Heartland Community College on a 100% tuition scholarship – which he will attend this fall. Heartland Community College Head Coach, Jonathan Titzel, approached Soccer Assist after seeing Josh’s highlight tape and said ‘I need a goalkeeper who will come in and compete for the number 1 jersey. Joshua is a confident keeper with great ability, I have no doubt he will go on to transfer to a big 4-year program.’

SA director Junior recalls, ‘Josh has been a great character to work with. He is determined to do well and take his soccer to the next level. I have no doubt he will move onto a D1 school and win accolades throughout his career.’ Josh’s playing style is similar to Manchester City’s goalkeeper Ederson, he closes angle down well, great reflexes and shot stopping. Joshua Bonaiti is a name that will be said a lot throughout the American college soccer conferences. Soccer Assist would like to wish Josh all the best his ventures to the U.S. 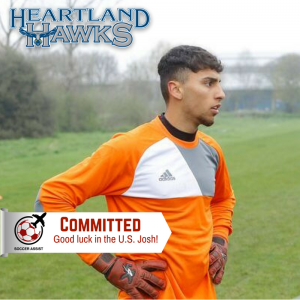