By Soccer Assist12th June 2018No Comments

We are thrilled to announce that Soccer Assist Athlete Tom Hopper has secured his place and committed to Jefferson College on a 75% scholarship offer. Hailing from Bournemouth, the former Ringwood Town FC player will be joining the Jefferson Viking’s men’s soccer roster this fall.

Tom tells Soccer Assist that he has been playing soccer from a young age, he has had many successful years of youth football, having been involved in an elite setup for a few football clubs. Tom’s football resume states he has played for Bashley Youth Alliance U19 in the National Youth League, Ringwood Town FC Reserves, to later progressing to Ringwood Town FC’s first team. Tom tells Soccer Assist that he moved to Ringwood Town FC a few seasons ago where he has been playing as a centre-back in the first team. 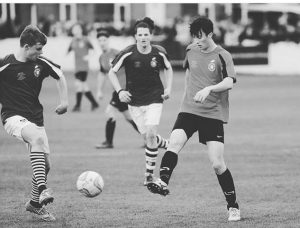 When describing his playing style Tom describes himself as a ‘ball-playing centre-half who likes to take the ball from the keeper and start the next phase of play. I am strong in the tackle and love a header. I am also not afraid to drive out with the ball and take players on. I feel as though I am very good at communicating with the team, especially the rest of the defence.’ All of these qualities are what gravitated multiple offers from U.S. colleges. Tom’s final decision was to start his college soccer career at Jefferson College.

Jefferson College Head Coach Brocklon Chatman said ‘ I am looking for top quality student-athletes for our men programs and Hopper fits the criteria. I like his size and think he will play a key role at Jefferson.’

Soccer Assist Director, Junior recalls, ‘‘Brocklon wanted to learn more about Tom as soon as he watched his video and viewed his profile.’ The composed centre-back reminds Soccer Assist as a Leicester City Football Club’s defender, Harry Maguire in his Premiership victory season, as he loves to ‘travel forward’. Tom attended SA Brunel University assessment day in October 2017, since then he has been a reliable centre back for Soccer Assist in our client showcase matches, gathering attractive footage for his highlight tape. Most recently, the young defender represented Soccer Assist in their annual Hackney Tournament playing against teams such as Adidas Glitch squad and Leyton Orient Football Club.

We know Tom is going to hit the ground running with Jefferson Vikings and will make a name for himself within the NJCAA. Good luck Tom, we wish you all the best!