By Soccer Assist11th July 2018No Comments

We are thrilled to announce that Soccer Assist client Kieran Chance has secured his place and committed to Mid-America Christian University in Oklahoma. Hailing from Milton Keynes, Kieran has played at county level representing Bedfordshire, as well as club level football for AFC Kempston. Kieran will be heading out to Oklahoma this fall to start his American scholarship journey and join the Mid-American Evangels Men’s soccer roster.

Kieran tells us that he has been playing soccer from a young age, he has had many successful years of youth football throughout the Milton Keynes and Bedford areas. The 17-year old forward has played for teams such as Bedfordshire County U18s and AFC Kempston U18s. Kieran is an energetic forward and has similar playing traits as Manchester City and England forward Raheem Sterling. Both players have a keen eye for goal and the pace to beat defenders at ease.

When speaking on his playing style Kieran describes himself as an ‘exciting young, confident, winger who always looks to beat his man. I also use my pace well to put the opposition under pressure and cause mistakes.’ These are the qualities which attracted attention from NAIA colleges such as Mid-America Christian University.

The Mid-America Christian University assistant head coach for men’s soccer Adam Kay is excited about Kieran’s arrival. Coach Kay states, “Kieran is exactly what we are looking for. Our right winger is moving on and we feel Kieran has what it takes to replace him!” Kieran will also be joining Soccer Assist’s client Simon Van Rheeden at MACU this fall.

Kieran joined Soccer Assist from the back of a partnered club showcase fixture the agency had with Mursley Football Club in 2016. Since then the young forward has participated in various SA showcase fixtures. Most recently Kieran was apart of the Soccer Assist squad in an annual Hackney tournament playing against oppositions such as Adidas Glitch squad and Leyton Orient FC. Kieran’s parents have been very supportive of his football journey so far and have attended all of his showcase matches.

Soccer Assist director, Junior says ‘I’m happy for Kieran and what he has ahead of him. He’s really coachable and has the desire to learn and improve on his game. He recently played in the Dallas Cup and visited MACU – this is great for him to see the standard and has a feel for what it is going to be like.” 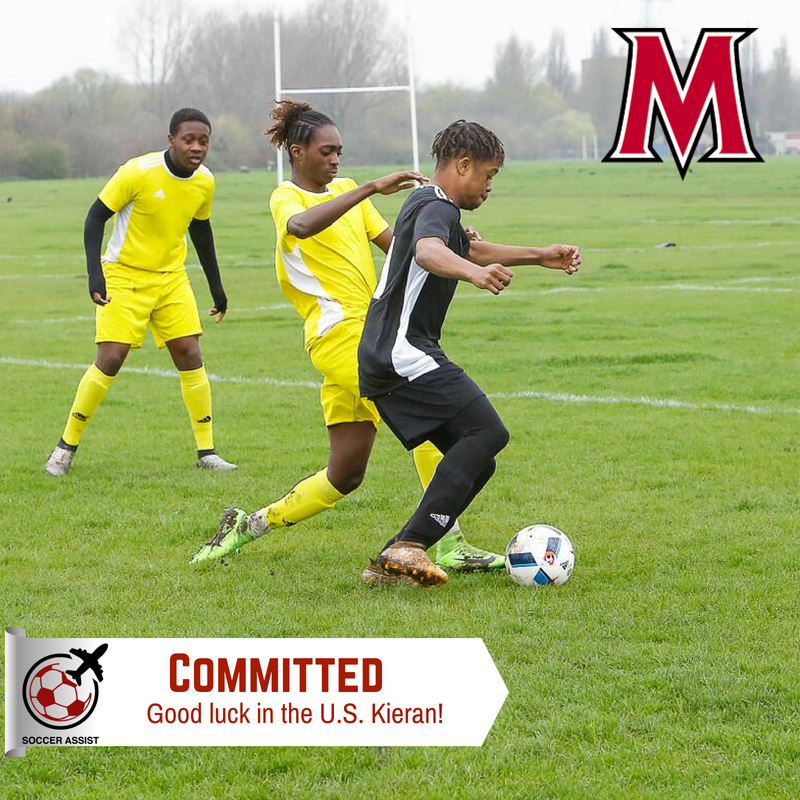