By Soccer Assist19th June 2018No Comments

We are thrilled to announce that Soccer Assist client Mahdi Karim has secured his place and committed to Northwest Kansas Technical College. Hailing from Morocco, the former Royal Federation of Moroccan Football (F.R.M.F) player will be joining Northwest Tech Mavericks Men’s soccer roster this fall.

The 21-year old attacking midfielder tells us that he has been playing soccer from a young age, he had many successful years of youth football, having been involved in an elite set up for his clubs in Morrocco. Mahdi tells SA that he moved to Chester a few years ago where he has been playing for the past few seasons as an attacking midfielder. Mahdi describes his three best attributes as ‘Simple, smart, fast’.

Northwest Tech Mavericks head coach, Robbie Carroll, is very happy with his new signing. I’m interested in Karim. He will be a good addition to my roster’. Mahdi heads out to Kansas this August and is excited to kickstart his soccer scholarship journey.

Soccer Assist Relationship Coordinator Liam is confident Mahdi will make an improve as a player and make an impact in the U.S. ‘Karim is a versatile and exciting player, I think the states will bring the best out of him athletically.’ he says. Mehdi attended one of Soccer Assist’s Birmingham assessment days in October 2017. Since then Medhi has shown amazing improvement and has been a key impact player within our showcase matches.  Most recently Mahdi was one of the Soccer Assist athletes selected to be apart of the Catapult Sports launch for their new product ‘PLAYR’. 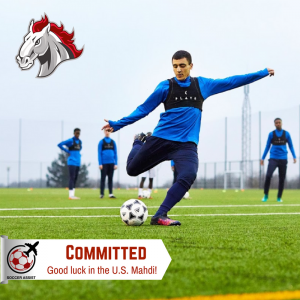