By Soccer Assist18th June 2018No Comments

We are thrilled to announce that Soccer Assist client Davide Bodei has secured his place and committed to the Genesee Community College. Hailing from Manchester, the former Rochdale AFC central midfielder will be joining Genesse Cougars Men’s soccer roster this fall.

Davide tells us that he has been playing soccer from a young age, he had many successful years of youth football, having been involved in an elite set up for his club. Davide tells SA that he moved to Rochdale AFC, where he has been playing for the past few seasons as a central midfielder with a playing style similar to West Ham’s Mark Noble. Davide has been described on the pitch as a player that ‘does the simple things right’.

Genesee Community College Men’s Soccer Head Coach reasons for offering Davide a place within his roster of athletes was that he ‘was looking for a midfielder that can retain possession well and Davide does just that.’ Davide Will head out New York for his college soccer adventure this August.

Davide attended one of Soccer Assist’s summer assessment days in Manchester at Platt Lane Sports Complex in 2017. Junior, Soccer Assist Director states ‘the transition from Manchester to New York will be great for Davide, this will give him the opportunity to express himself within a national championship team.’ Soccer Assist would like to send Davide the best of luck in his NCJAA ventures and college soccer experience. 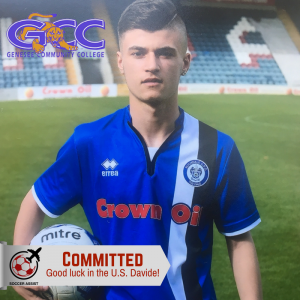