In order to prepare our athletes for their experience at College in America, we hosted a residential pre-season camp at the beautiful site of Stowe School in Buckinghamshire.

Our one week preparation camp mirrors the format and structure of the American Universities pre-season schedule to ensure our players arrive ready both physically and mentally.

52 players aged 15 to 22 were provided with a number of workshops with a Sports Nutritionist and Sports Scientist coming in to expand on fuelling recommendations and key recovery methods to better prepare them for life as a student athlete.

Equipped with state of the art sporting facilities, premiere boarding and provisions such as prehab & rehab clinics, Stowe School was the perfect place to host our very first residential camp. 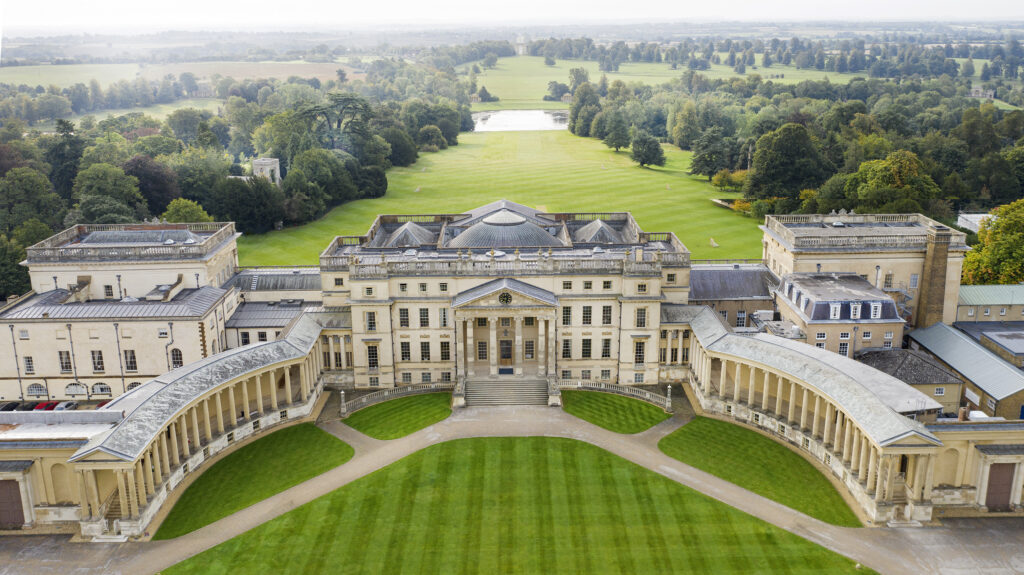 The players arrived at the jaw-dropping venue on a Sunday evening and after a quick check-in and tour of the facilities it was straight to dinner in the Grand Dining room.

With England’s successful run in the Euro 2020 tournament we hosted a watch party on the big screen in the sports hall. Although a bad result for the England squad, it was a great way for our players to start getting to know each other and talking about the upcoming week.

Up bright and early with typical English showers blessing our fire alarm test, the players got slightly wet on our morning journey between the chapel and dorm house. Off for a quick breakfast and then to the Sports Hall for a couple of presentations.

Former soccer scholar, ex college soccer coach and current Soccer Assist employee James Quinn gave the first presentation of the day, detailing what to expect when heading to College in the US. This included elements of pre-season, important academic tasks to complete and useful items to purchase. 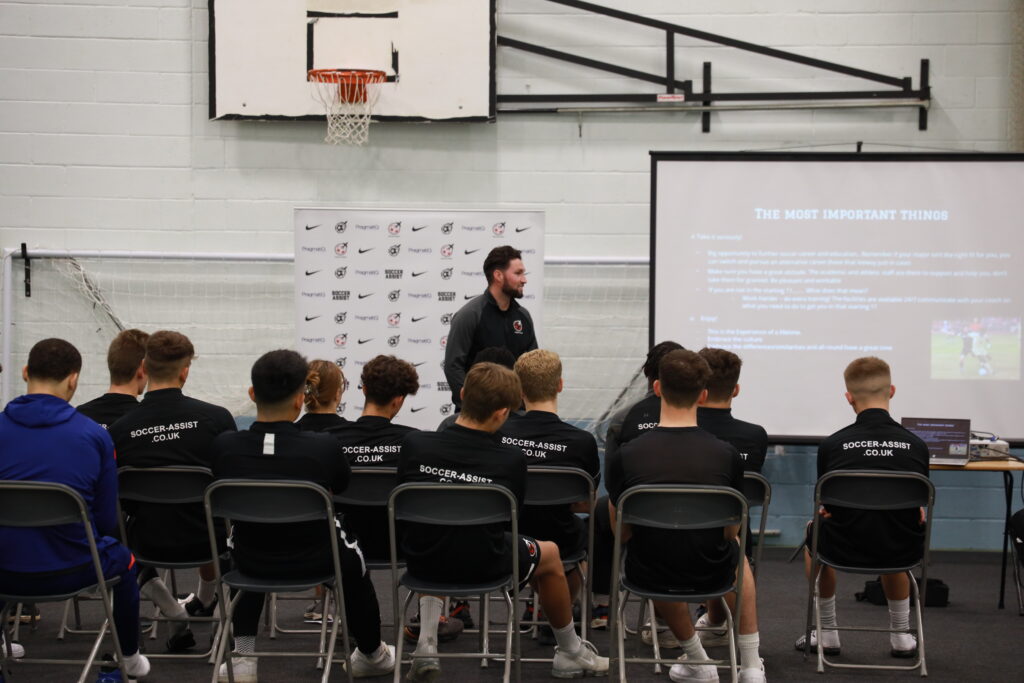 Soccer Assist Head Coach Joe Oxley and Assistant Coach Gedeon Okitio then took to the stage to present how the week would be broken down from a training perspective as well as the desired outcomes and attitudes of the players. Fair to say that the players were itching to get to the football field.

And so it was time for the first training session of the week. With a specific focus on preparation and a high volume of social and technical skills, the athletes had a great start.

After a quick lunch followed by a short rehabilitation and recovery session the players were back out for their second session of the day. The focus shifted onto building up play quickly followed by small sided games based around the speed of play. 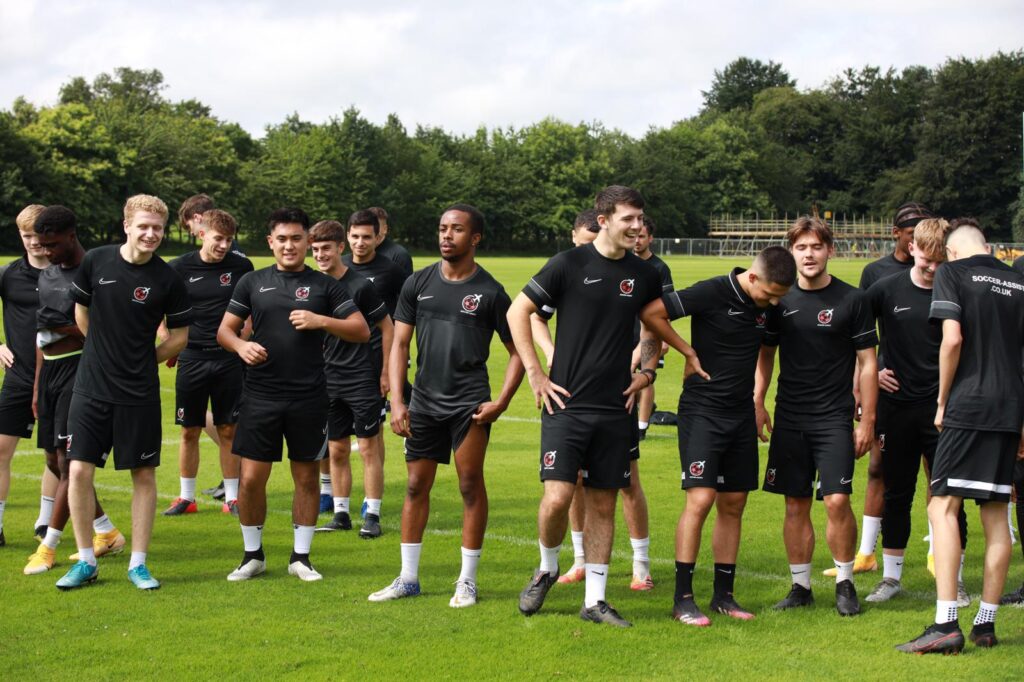 The day rounded off with an analysis session, something that the athletes will have to adapt to at College. Coach Joe took them through understanding transitions with an introduction to certain roles and responsibilities when they win the ball.

All in all the players put in a great effort for the first day, rounded off with dinner and some time to socialise and get to know each other.

Tuesday was set up once again to host a double training session and a special opportunity for our goalkeepers to train with some professional football league players. 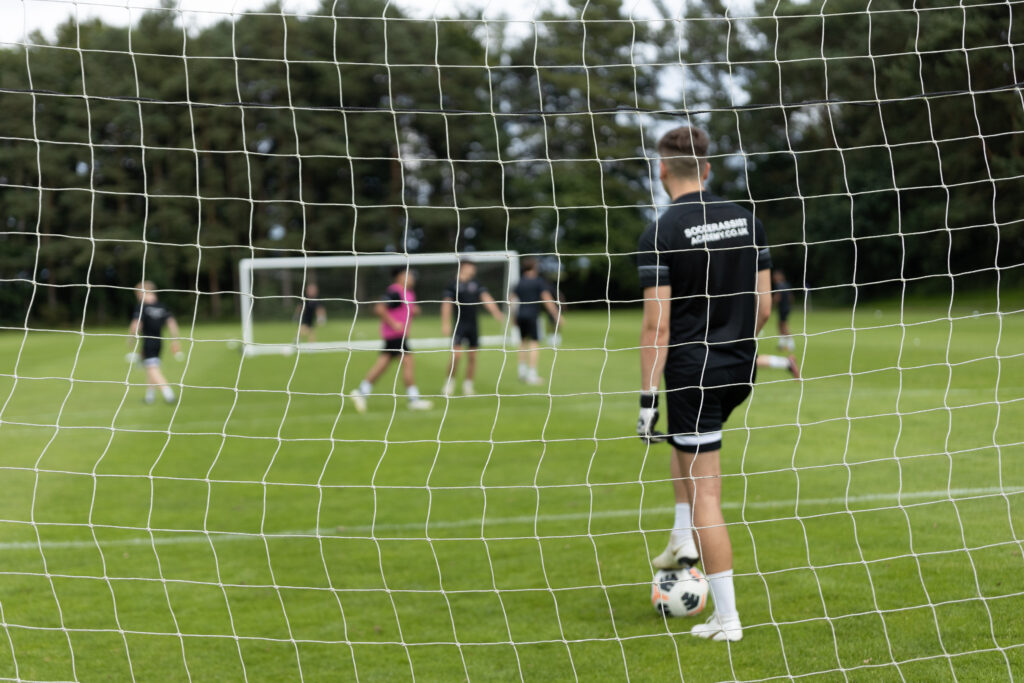 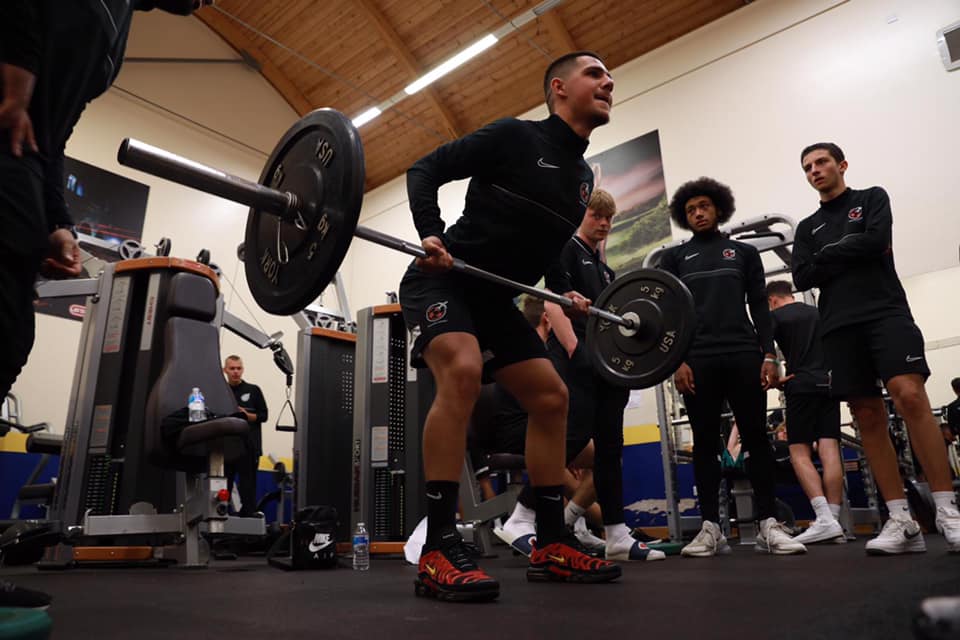 Following the morning workshops it was time to head down to the pitches for some fitness testing. We find a lot of players are surprised by the intensity of pre-season training at College. It’s important for players to be able to evaluate their own fitness and prepare themselves. For many of our athletes this would be the same testing they will be getting in just a few weeks time when they head out to America.

An hours lunch break gave the players enough time to re-fuel before heading back to the pitches for a position specific workshop. Having broken the group up into defence, midfield, attack and goalkeepers, players worked on their own role in a number of game-play situations. This followed on from the analysis session the night before with the objective being that the players would implement the information and tactics discussed in the matches scheduled at the end of the week. 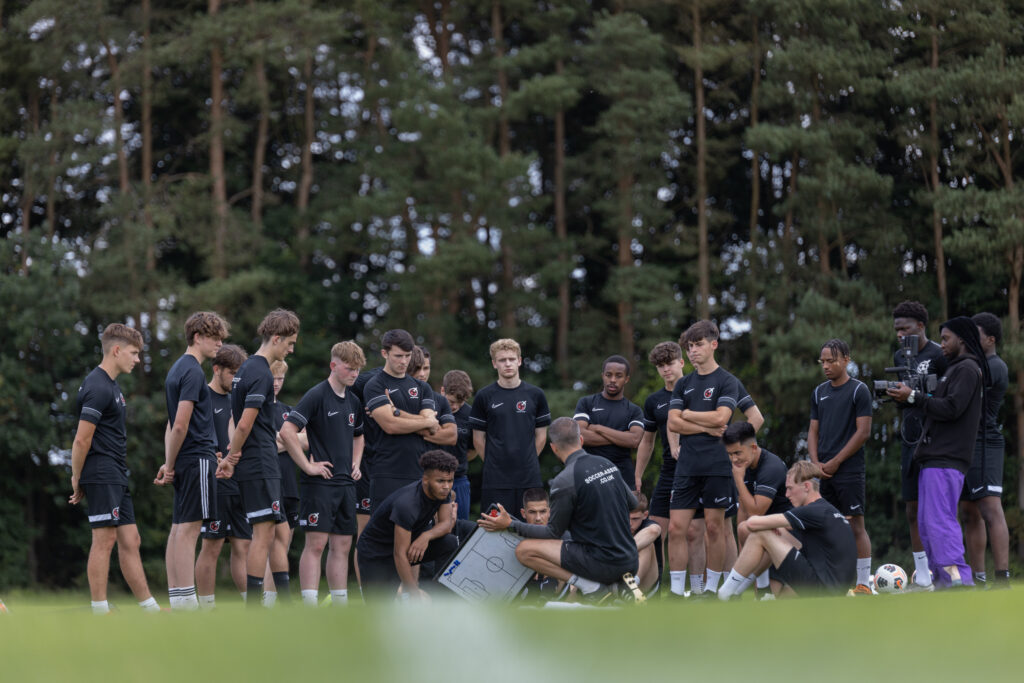 Tuesday rounded off with dinner and some free time, where most of the players took the opportunity to socialize in the common room areas of the dorm house. Equipped with ping pong tables, pool and a TV there was plenty to keep them occupied during the necessary down time.

By this point it was clear to all players how important recovery time is. Wednesday morning was spent with educational and practical workshops and presentations from Sports Scientist Akash Modhwadia and Sports Nutritionist Fran Baldwin.

The players learnt a great deal about the advancements they could apply to their training as well as the necessary means of recovery and fuelling they could implement during the remainder of their athletic careers. The nutrition workshop showed the players how easy a no bake, minimum ingredient snack would be to make and the massive benefits it would have on bettering their energy levels.

After lunch the players headed to the swimming pool where they were split up into groups and worked on a number of aqua-rehabilitation techniques. Not to mention a bit of fun! 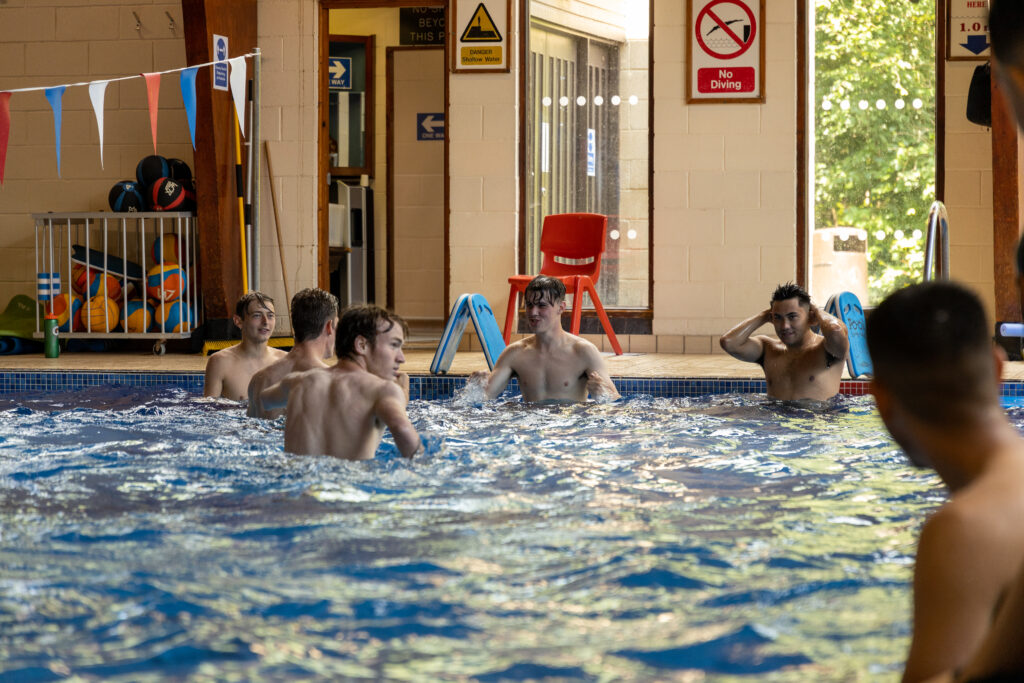 The day was capped with a bit more fun out on the pitches with some zorb football. Our fun extra-curricular activity ended up looking more like bulldog than any form of football but our players found these the necessary lifts to take them into the remaining two days of the camp.

The final full day on camp found the athletes starting off their day with a quick stretch and activation session with Coach Gedeon before heading out to the beautiful pitches for a tactical session. 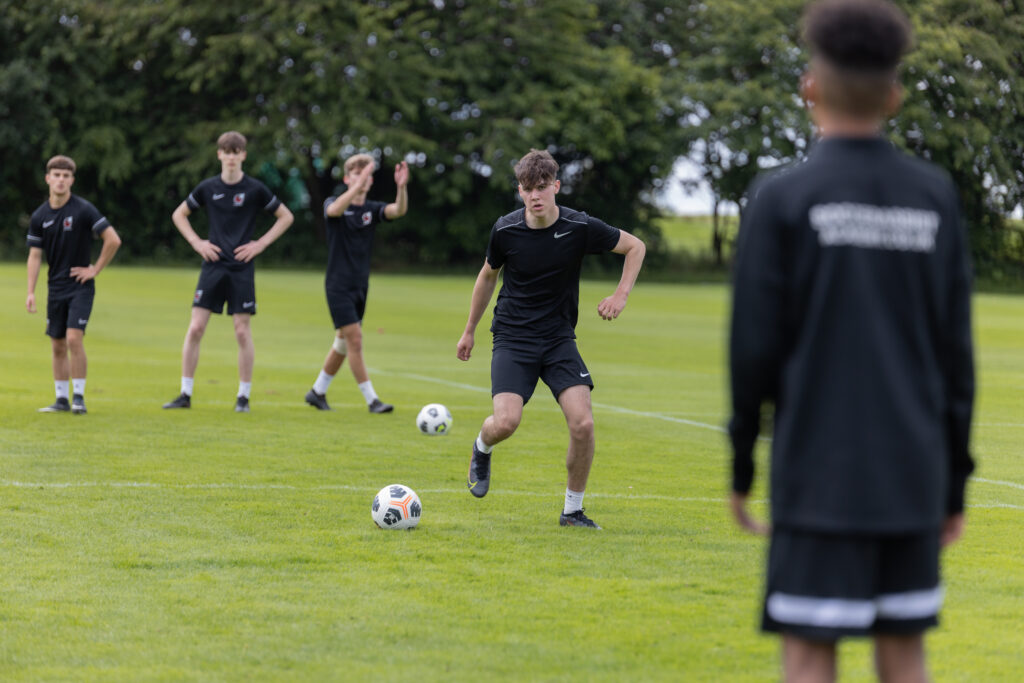 After lunch the players got to experience a bit of football tennis before going back to the pitches for their last training session of the week. Having been broken up into their match day squads the competition began with a number of challenges. The winning teams getting to pick such perks as picking game day kits or their game play order. 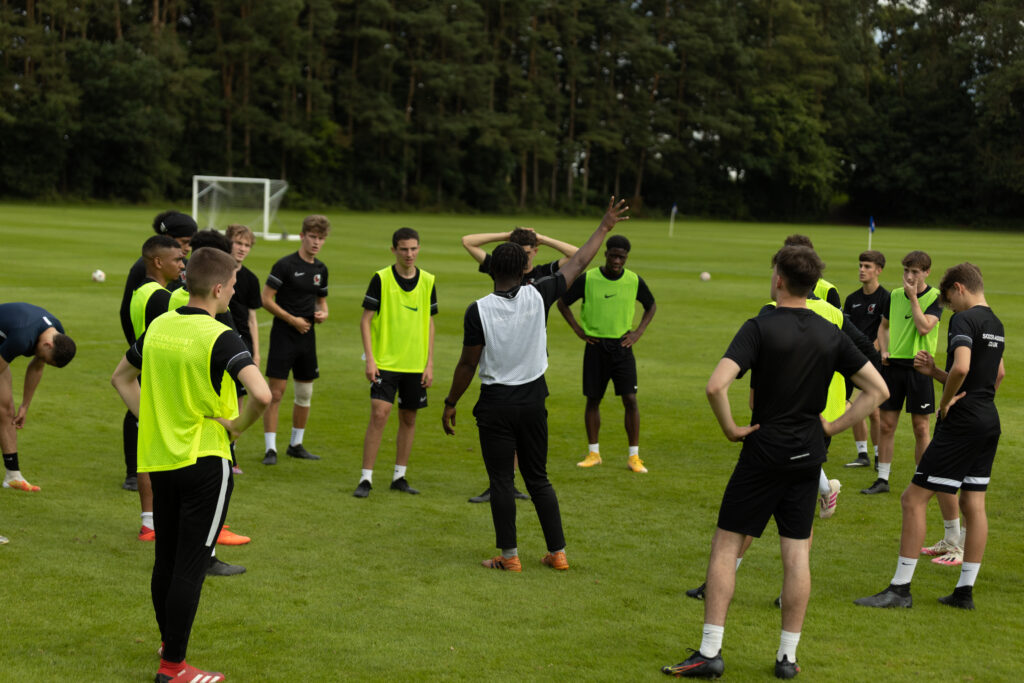 With the penultimate day of camp coming to a close, the players got to take advantage of having some current soccer scholars on-site and were able to pick their brains about what it’s like competing over in the States. The camp was not only a great opportunity for the players to meet other individuals who will eventually be heading out to the US, but to also speak with athletes who have already committed or completed time at an American University.

The final day on camp meant matchday. With a quick pack up of the dormitory rooms and some team photographs outside of the main hall, it was game time!

Our athletes fought valiantly in the summer heat, executing everything they learnt during the week and we saw some great quality football from all the boys.

The first game to kick start our mini-tournament was ‘reds vs dark blues’. Both teams came out strong looking to get their first win and top the leaderboard. The red team had a lot of early chances but were unable to put the ball in the back of the net. It was a tough battle and the deadlock was finally broken Caio Hughes picked up the ball from 24 yards out and struck it in the bottom corner. The red team kept pushing for an equaliser but unfortunately for them this led to the next goal coming down the other end again. The dark blues had a corner on the left hand side. Noah Mason whipped the ball in with a lot of pace deceiving the keeper and scoring from the corner kick. Final score 2-0. 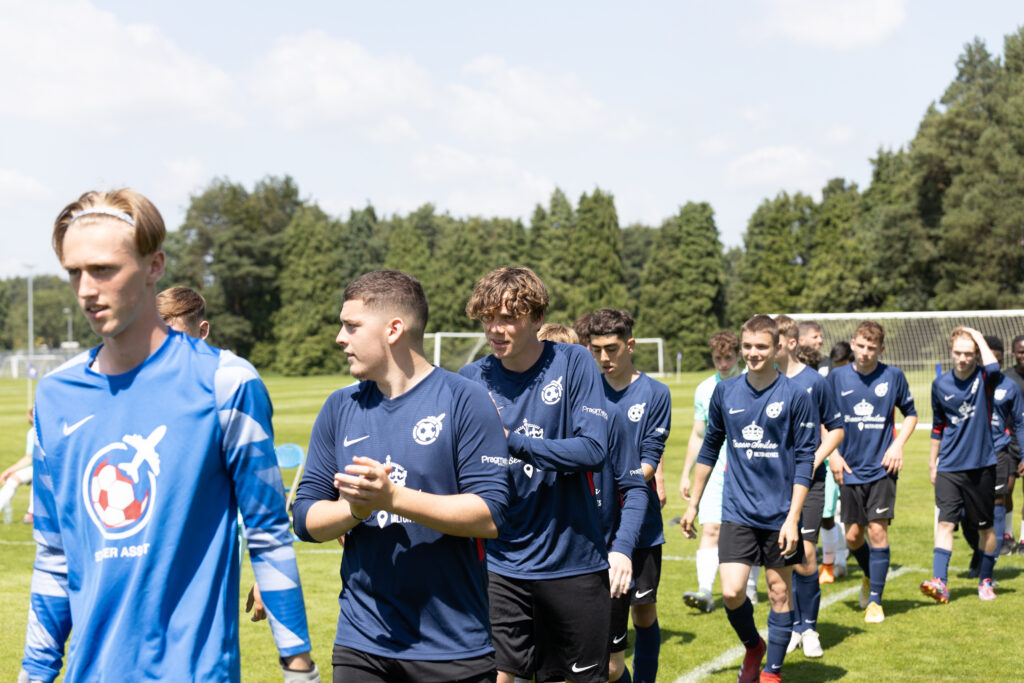 The second game of the day saw a frustrated red team take on a fresh teal side. It was very much a similar tale for the reds, lots of possession and chances but they just couldn’t hit the back of the net. It wasn’t until the second half that the teal side managed to get themselves in front. Elias played a well weighted pass into Billy Allison’ who was as able to place it through the keeper’s legs.

Ten minutes passed with both teams trying to get that next goal and it was the teal side who were able to take advantage. Daika Montague picked up the ball and took on a player before playing the ball to Billy Allison who once again was clinical in front of goal – putting the teal side 2-0 up.

With three minutes left to play Elias took the ball by the half way line, he used his pace and footwork to take on two players, played a one-two with Daika before smashing it in the back of the net. Final score 3-0 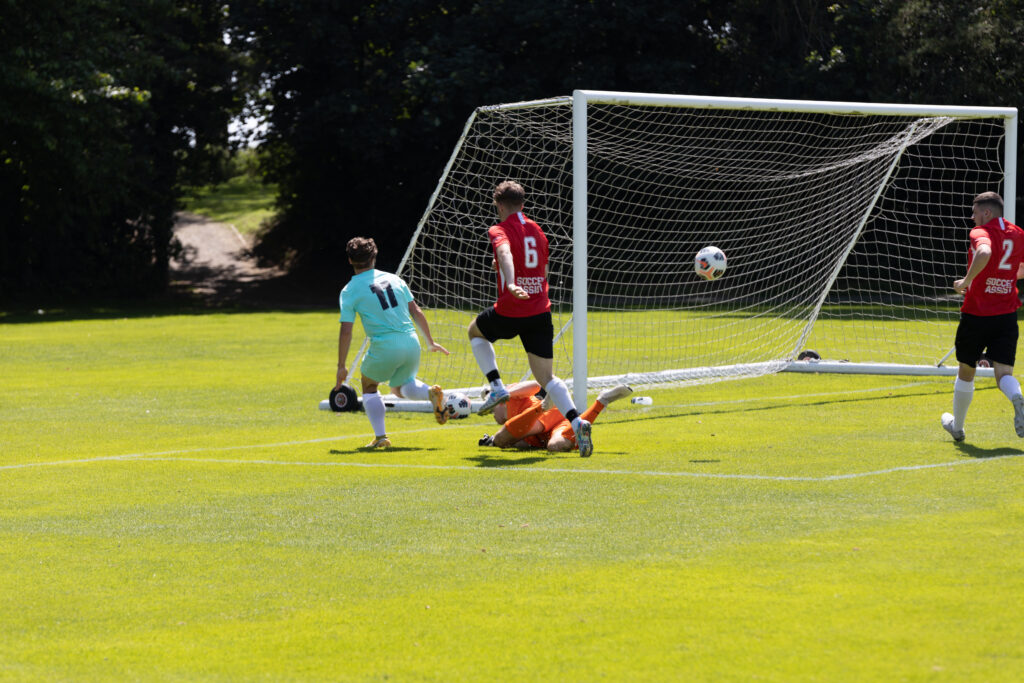 The third and final game was the ‘Championship’ match between the ‘Dark Blues’ and ‘The Teals’.

The first half was a extremely competitive and very even with both teams creating chances and both goalkeepers making great saves. The deadlock was broken 10 minutes into the second half when the Teals’ conceded a penalty. Blue number 9 Guy Mealor stepped up, thriving under the conditions, he converted it clean to bottom left. 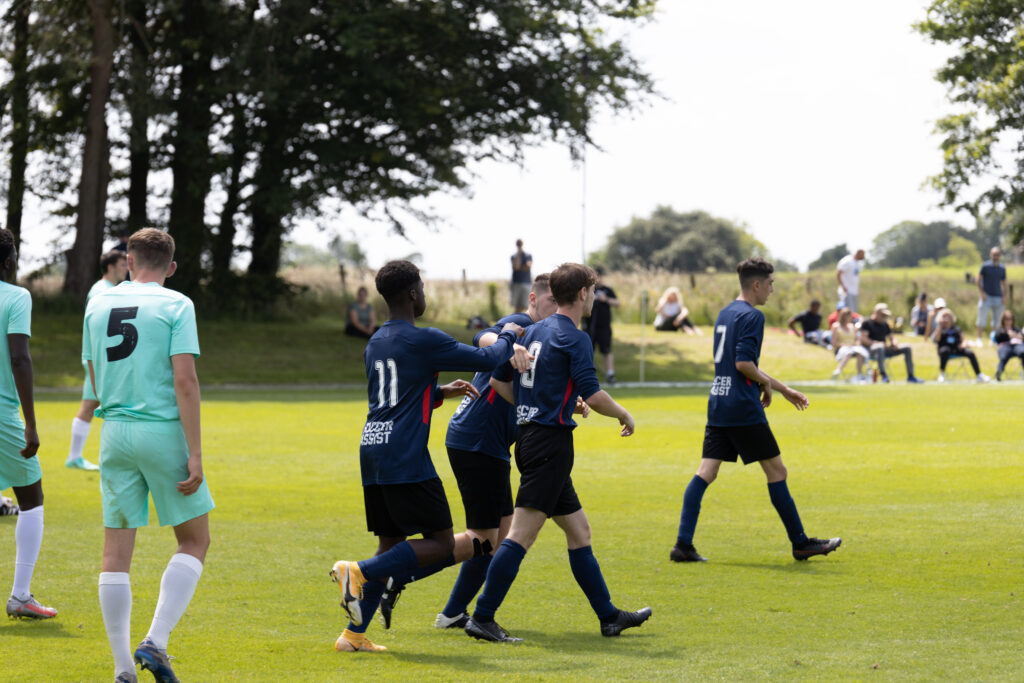 The Teals were chasing the game now and trying to get that equalizer. However, the Blue’s caught them on a counter attack and it was Welsh machine Caio Hughes who scored the second goal of the game with a calm finish. Hughes sprinted down half the pitch to celebrate with the entire team clinching the championship.

Congratulations to the Dark Blue team who squad scored 5 goals and had a solid defensive record conceding 0.

A huge congratulations to all players in involved thought-out the entire camp! Same again next year?