Soccer Assist are delighted to announce yet another athlete has committed to a college on a 100 per cent tuition scholarship. 21-year old central midfielder Conor Kilganon has signed to Anderson University to complete his Master’s degree. Conor is thrilled to join the Anderson University Trojans men’s soccer roster this fall.

The 21-year old central midfielder currently plays for Royston Town FC in the Hertfordshire area. When describing his playing style Conor states, ‘When playing in the middle as a centre midfielder I am a box-to-box player. When playing CDM I’ll sit in front of the back four, get the ball and look to play forward and offer protection for them. I am very strong in the air and can play subtle through balls but also hit a 40-yard pass. I am comfortable playing with both feet. On the pitch, I do a lot of organising when the ball breaks down. Winning the ball back is a big part of my game, depending on whether we are pressing or sitting back I’ll do either and look to anticipate passes and nick it back for the team to then break.’ Conor’s three strengths are his vision, organisation and understanding the game.

Conor approached Soccer Assist in 2017 because he wanted to combine his postgraduate Master’s degree studies with a U.S soccer scholarship. He had previously attended Plymouth University to complete his undergraduate degree. Now Conor aims to further his education and football at Anderson University.

When speaking on the SA client’s commitment, Soccer Assist Director Junior comments, ‘Conor will be studying towards a Masters Degree while playing at a high standard. I’m positive Conor will be an impact player for Anderson and should adapt easily’.

Anderson University Head Coach, Michael Zion, admits he is excited to have the young prospect joining his roster. Zion states he is  ‘looking for a difference maker in the centre back position. Conor’s experience and versatility is exactly what we are looking for.’ 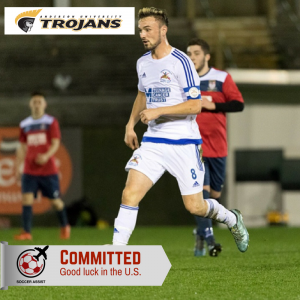 5 ways to boss the midfield like Gerrard, Pirlo & Lampard

5 ways to boss the midfield like Gerrard, Pirlo & Lampard