By Soccer Assist25th June 2018No Comments

We are thrilled to announce that Soccer Assist client Harvey Thorne has secured his place and committed to the Colorado State-Pueblo University to play soccer in NCAA Division II on a 75% soccer scholarship. Hailing from Milton Keynes, the former Buckingham Athletic FC and Northampton Town Football Club academy player will be joining Colorado State-Pueblo University Men’s soccer roster this fall.

Harvey tells us that he has been playing soccer from a young age, he had many successful years of youth football, having been involved in an elite setup for Northampton Town Football Club. The 17-year old midfielder has a presence on the pitch like German international Mesut Ozil. Harvey is is a versatile midfielder who creates plays with his keen, composed and confident approach when he gets on the ball.

During the recruitment process, a faculty member of CSU met with Harvey during a trip of London to further court Harvey into accepting 75% scholarship offer. Colorado State-Pueblo University Head Coach, Coach Stanley, was eager to sign Harvey and include him in next seasons college roster. Ron told Soccer Assist ‘I like how Harvey is naturally both footed and can play in many positions on the field. His versatility will help take CSU to the next level.’ Harvey will be joining Soccer Assist client Lewis Chambers at CSU who joined the roster in 2017.

Soccer Assist Director Junior states ‘It’s been great working closely with Harvey and his family. He was very detailed in his choice of university and I’m sure CSU will suit him both athletically and academically’ We would like to wish Harvey all the best in his ventures of playing NCAA Division II soccer for Colorado State-Pueblo. 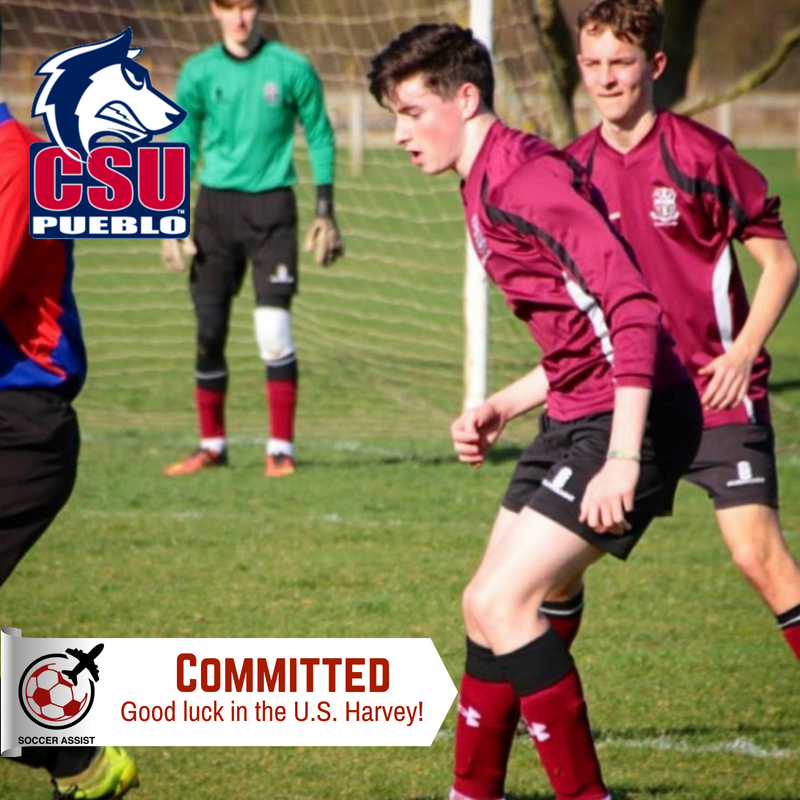